Charles Darwin commemorates those who assist natural selection by removing themselves from the gene pool… Darwin Awards are given to honor those who do their best to ensure that the next generation is smarter–by one. These heroes sacrifice their very lives to give our children a better future… 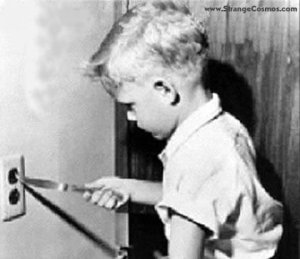 I remember first learning about the Darwin Awards in Grade 10 Anthropology class. In attempting to explain Darwin’s theory of evolution to a group of teenagers more concerned about S Club 7 breaking up  (or was that just me? …Just kidding. Everyone knows they didn’t break up until April of that year) my resourceful teacher decided to tell us about a very brave, stupid and coincidentally dead, man. This man was determined to fly by creating a jetpack.

His “jetpack” was what most people would describe as a backpack loaded with explosives. The best part is it wasn’t the explosives that killed him, it was his choice of venue for the test-run of his “jetpack”. After setting himself up in a large field and realizing that his jetpack really DID make him fly, he realized he hasn’t anticipated needing to steer or stop before propelling himself head on into the mountains right in front of him. BOOM! DEAD.

There’s also this man who tried to turn himself into a human bottlerocket by shoving a firework up his butt. Or this big ball of impatience and anger who made an elevator wheelchair accessible all by himself.

They even give honorable mentions to these evolutionary throwbacks whose actions have only almost killed them. 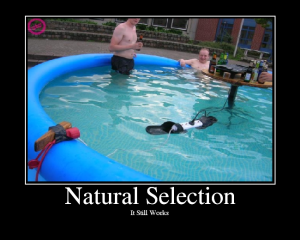 What better way to make yourself feel smarter than reading about these fantastic, fatalic failures?